Katrina (name changed to protect identity) phoned looking for an appointment in August 2019. She had gotten my number from a colleague who had previously availed of my services and who recommended her speak with me. During the call I asked a preliminary question, one I ask of all who reach out to me for support … "why now?" Katrina, responded by revealing that she was awakening each morning and "dreading going to work". Her distress was acknowledged and an appointment set for the first available slot a few days later.

Katrina arrived on time for her scheduled appointment and after a little chit chat; "You found your way here OK? " and so forth, 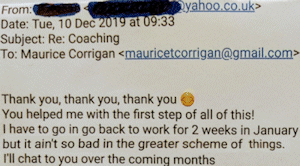 just to let her settle in before broaching the question of her overwhelm and distress.

I began by reminding her of what she’d revealed on the phone and reflected on how distressing that must be for her by times. The dam immediately started to crumble and she sobbed her way through the next few minutes. As she shed those tears, I gently informed her about research that demonstrates how various type of tears differ; those emotional tears containing higher levels of stress hormones than do basal (aka lubricating) or reflex tears (the ones that form when you get something in your eye). Emotional tears also contain more mood-regulating manganese than the other types. Stress tightens muscles and heightens tension, so when you cry you release some of that. Crying activates the parasympathetic nervous system and helps restore the body to a state of balance.

As she regained some composure, I conversationally began enquiring as to the circumstances which precipitated the stress, asked about when it had started, and then having located it in time began to respectfully explore what was going on in her life around that time.

It transpired that some two years previously she had received a significant promotion at work. Shortly before that her elderly father had suffered a stroke and Katrina had taken on the task of supporting her mother at weekends in caring for her father. Unfortunately, her parents lived at the other end of the country and her visits necessitated a three-and-a-half-hour car journey either way. She was also attempting to keep her home together and was, along with her husband, parenting a six-year-old and an eight-year-old daughter. All in all, as she told her story it was becoming apparent to her that she had taken on too much, she had become overwhelmed and exhausted.

Without me even having to reflect much of that narrative back to her, I sensed she had already begun to grasp how much "too much" she’d taken on. If I am recalling it correctly, I may have quipped "where’s your super-woman outfit today?" and then followed up by painting a word picture comparing her to the old time show performers spinning plates atop of canes … feverishly moving from one to another try to keep them all spinning. Katrina had realised for herself the cause of the difficulties and discomfort she had found herself in.

We agreed on a goal and tested it (was it realist & achievable?). Identified her supporters, as well as potential derailers and then broke it down into manageable chunks before sequencing it. I taught her some relaxation techniques to sustain her through the change process and then during one of them used guided imagery to mentally rehearse the plan she’d designed.

The session was completed in 90 minutes (first sessions run for that with subsequent ones lasting an hour) and cost Katrina about the same as she might have paid to service her washing machine. We exchanged a couple of emails to monitor progress over the following months, culminating with the one photographed here of December 10th.

Katrina was financially secure and decided to take a year’s sabbatical leave from her senior manager position with a multi-national company, to spend more time with her family, her young daughters and aging parents.

It was a joy and a privilege to support her in coming to that decision.